As I wrote about on June 21, I was planning on my first travel trailer trip to be to the Ann Arbor KC trial this weekend in Monroe. All DID go as planned. I seem to have given The Travel Trailer the nickname of 'T3'. Much easier to say. I brought it home on Friday June 24, after taking an hour of video of the guided tour of the trailer itself and of the hitching process. This has already turned out to be an excellent thing, since I've referred back to it to figure out several different things.
I spent quite a bit of time last weekend shopping and outfitting it, and Fritz and the 4 dogs (our 3 plus visiting FCR puppy Little) spent Sunday night (July 3) sleeping in it, parked in the driveway a short walk from the house. I think I got this excellent suggestion from a Facebook friend. It only took 3 extra trips to the house for stuff I forgot. It was hot and stuffy in there but we couldn't get the AC to work. It had worked fine at the dealer the week before, but I couldn't get the breaker panel cover open, so we muddled through. It did cool off over night just fine.
Fritz was up and out early the next morning to run in a 4th of July 5K. I made myself tea, had breakfast, and took a shower, which meant figuring out the water heater (it can be either electric or propane) and the water pump. Step 1 of the new adventure completed. I also figured out how to open the circuit breaker panel with the help of the video tour, and sure enough the AC circuit breaker was off. My 1st trouble shooting success.
That afternoon, after reviewing the hitching video footage and improving my list of hitching instructions, Fritz and I got it hitched up, and I took it for a short drive around our country block, then parked it behind the training building, which will be its storage spot when not in use. I am very glad it is such a wide area, since my backing skills are on the poor end of the scale right now. But the wide parking area is plenty wide enough for me to get it turned around in, which is a relief.
Gina Czapiwski, her husband Rob, and their daughter Tracy were also going to camp at the AAKC trial, so Gina very kindly went to the Monroe Fairgrounds and reserved us adjoining camping spots.
We were finally packed and ready to leave home a bit after 2 on Friday. The drive was thankfully uneventful. When I arrived at the fairgrounds, I pulled off to the side and walked in to find my camping spot. I didn't want to end up with the Burb and T3 trapped in a maze of twisty little passages, unable to extricate myself. Luckily, the spot was such that I was able to make a loop and pull in, no backing up required. Yeah! A 25' x 50' spot sounds really large until you pull into it with a 23' trailer attached to a Suburban. The show building was close enough that I could walk there in about 3 minutes, so I was able to leave T3 hitched all weekend.
Next step was to get hitched up to water and electric. I'd plugged into 110 power at the house and behind the training building, so I had appropriate extension cords for that. I dragged my cord over to the pole, popped open one of the covers and... uh, oh, it was a 30 amp receptacle, not a 110. Ack! Deep breath. There was a 110 plug on the other side of the pole. I plugged in, but when I checked in T3, there did not seem to be power. Then I made the dismaying discovery that without being plugged in, the 110 outlets don't function. Uh, oh, what would I do to charge my various electronic gadgets to which I'm addicted?
Next, I pulled out the brand new water hose to hook up to the water supply, uncoiled it, and... it reached about 1/3 of the way to the water supply. It looked like I'd be unhooking the trailer and driving somewhere to buy more hose. When my neighbors noticed my predicament, they kindly offered me a new 50 foot length of hose, which they didn't need since they were close enough to the supply on the other side to not need it. I got both ends hooked up, turned on the water and it dripped like crazy at the source. So I turned the faucet back off and PHSSSST, the water sprayed liberally out the top of the hose, getting me rather wet in the process. Fortunately, it was a hot afternoon. I switched so that my neighbor's hose was hooked to the faucet instead of mine, but it still leaked. I gave up and finished doing other set up stuff, putting out the awning, pulling out the big straw mat underneath it, and putting up the hardly-been-used X-pen. I put the dogs in it, made myself a cup of tea, and sat under the awning to enjoy it. My neighbors continued their much lengthier set up process - they had MANY more dogs than I did. I posted on Facebook about the fact that my attempts to get the water and electric hooked up had failed. Not 15 minutes latter, a white mini van pulled up and there were Charlotte and Jim Lovelace, who just happen to live 3 miles away from the fairgrounds. I've known Charlotte since my teen years in 4-H, and she's trained several dogs at NDT. They offered much welcomed assistance. The power wasn't working because the GFCI button needed to be reset. Once done, my power was on. The water issue was solved by filling up the tank and then just running off that via the trailer's water pump. 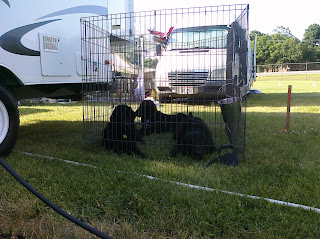 I moved the X-pen to the shady side of T3 late in the afternoon.
Here are all the Czapiewski's Boston Terriers. We figured out their 8 dogs probably weigh about what my 3 FCRs weigh. 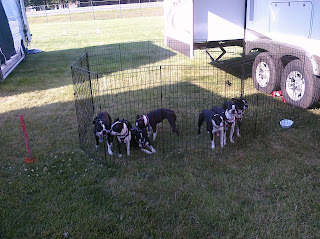 T3 has an outside shower with hot and cold water. Within 10 minutes of turning on the water heater, the water was warm enough to give Ty a bath on the adjacent grooming table. That was nifty! The water pressure wasn't great, but it was easy on my back. 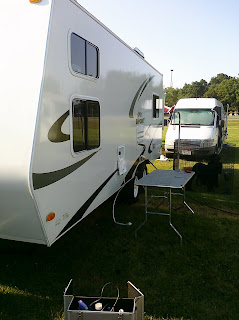 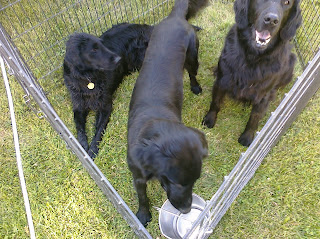 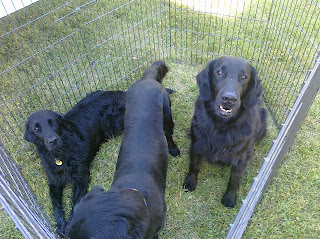 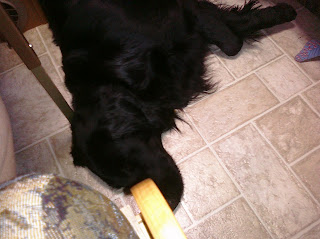 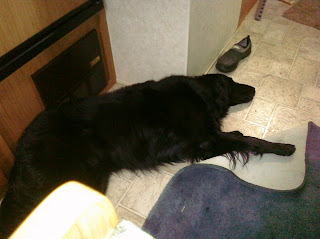 And finally, Little looking like she has no bones, lying up on the bed. 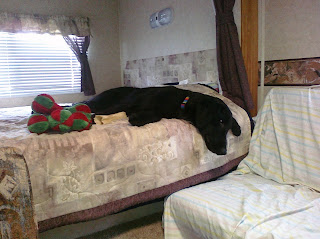 A kindly gentleman helped me with the thrilling chore of my first fairgrounds dump station visit, showing me the ropes and giving me some suggestions about other items to purchase to make the task a bit less onerous. The trip home went just fine. I got the trailer unloaded and unhitched successfully.
What a blast!

In case you are wondering who Little is, she belongs to Helen Szostak and her breeder, Cheryl Kistner. After Joker finished his UD in May, I asked Helen if she had a young dog I could borrow to do some basic field training with. I transported Little to and from the Maryland National, and she's been with me for training since. But that is another post. She'll probably be here until the end of July, when we'll be going on vacation. She's now 10 months old and a wonderful sponge for training.
Posted by Adele@NorthfieldDogTraining at 8:34 PM 1 comment:

Adele@NorthfieldDogTraining
Ann Arbor, MI, United States
I've been training my own dogs since 1985, and teaching obedience since 1988. I started Northfield Dog Training in 1990. I've been married to Fritz since 1984. We have two sons, Chris ('89), who recently graduated from The Natural Gourmet Institute in NYC, and Ryan ('92), who runs his own recording studio.
I strive to continue my own education in what works most effectively to train dogs and how best to communicate that to the people training those dogs. I work with many owners of diverse breeds of dogs.
I have written and self-published two books on competition obedience, and recently finished an extensive update to a video on retrieving. My goals for my business are to continue my own education and to help people enjoy their dogs through training.
I'm excellent at breaking dog training tasks into the smallest task needed by a given dog/owner team. I have helped people with diverse learning styles train their dogs. I'm flexible about what training techniques to use, striving to find the best and most efficient solution for a given team.