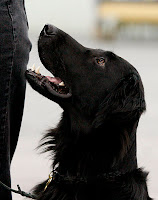 One of the best parts of accomplishing a long-sought goal is that delicious feeling when it pops into your consciousness that IT'S DONE! I DID IT! I have found that the bigger the goal, the longer this popping occurs.

Last Sunday, January 24, 2010 morning, my Flat-Coated Retriever boy Gryffin and I won the Utility B class at Oakland County Kennel Club. This first place netted us 14 OTCh. points. We needed just 9 to go over the magic 100 needed to finish his OTCh. title. So he is now:

The completion of Gryff's OTCh. means that I have now earned that elusive title on five dogs (Tramp, Rio, Treasure, Java, Gryffin), alternating Flat-Coated Retriever and terriers. The dogs have ranged from 5.5 years old (Treasure) to almost 7 (Java). Gryff is right in the middle at 6.5+. With both terrier boys, it was mastering either fronts or finishes that got us over the top finally. All except Treasure finished their title from a Utility B class. The first 3 all earned a High in Trial that magical day. Rio also earned High Combined.

I am not one of those elite trainers who brings a dog out in Utility, earns the UD and a mere countable-on-one-hand weeks later, have finished my OTCh. The journeys, while having their differences, have shared certain similarities. Each journey has been laced with our share of ups and downs, victories, times when we were also-rans, and NQs. Things go right for a while, then something breaks. We fix that, and things go right again for a while.

Of the 6 dogs with whom I've earned a UD, Gryffin was actually the youngest, finishing at 4 years 4 months. He earned the largest chunk of OTCh. points the first weekend after he finished his UD, winning a big Utility B class with a 198, which was worth 24 points. This was in October 2007. We mostly showed just in Utility over the next 6 months, in part due to Open stay issues, in part to solidify Utility for him. His OTCh and UDX took the time they did because we've taken off the last several summers from obedience to pursue advanced field training. When we recommitted to obedience in October 2008, he started qualifying consistently in both classes, and cranked out UDX legs 2-9 with very few NQ's, also garnering points for the new Obedience Master title at a regular rate. At the end of that streak, he earned 3 Open B 2nd places in a row. Although we suddenly started NQing in Utility, he finally earned that elusive Open B 1st place, plus a High in Trial. Frustratingly, the following weekend, he started failing the Open stays, blowing several placements in Open B. He finally completed both his UDX and OM1 on the same day in early May. 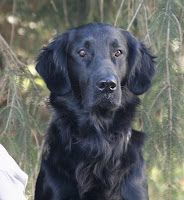 We showed one more time in the early summer, at the Flat-Coated Retriever National, where Gryff won the Utility B class for the 3rd year in a row, then went back to the fields for a glorious summer and fall of field work. We ran in four Master Hunter tests, and earned our 1st two passes of the needed five in glorious back-to-back weekends in September.

I didn't really get my head back into the obedience game until late November. We amassed mostly NQ's in the fall obedience trials, but by our last weekend at the Cleveland IX trials, I felt like we were back in the game, working as a team and enjoying our time in the ring. We even won a runoff for 3rd place in UB, netting us 2 more points.

I had some surgery the Tuesday after the IX trials, which meant a big slow down in our training. We didn't even attempt a fast until the Monday before the Livonia and Oakland trials. As I slowly recovered, several friends helped me out, between coming over to train and provide distractions, putting out articles and jumps, and driving me and Gryffin to some matches and trials.

I really appreciate all the cyberspace hurrahs we've received. The friendships made along these journeys are what make it all worthwhile.

Gryff is my first boy FCR, but he probably won't be my last. I decided a while ago that if you don't have a sense of humor, you shouldn't attempt to train, let alone trial, a boy FCR. He is a clown, and lives up to the "Peter Pan of the dog world" nickname. Some of his craziest NQ's have also been some of my most enjoyable memories of trialing him. His constantly wagging tail, quick sits, and leaping finishes are so much fun. Thanks Gryff, for a wonderful journey. Now, how about some ducks?

Note: The first photo is by Cathi Winkles, the second by Karen Taylor.
Posted by Adele@NorthfieldDogTraining at 7:34 AM

Loved reading about jour journey. How excitng for you. He's a good looking boy and best wishes pursuing his MH. When that glorious moment occurs I think you'll become the 5th all breed retriever to earn the combination Ch OTCH and MH Titles.

Did you attend the FCR National Specialty in 2008 when they were held in Oregon? Our boy Eddy (a toller) was the test dog for the Master tests.


Hope to meet you sometime,
John

ps. After Eddy accomplished that combination of titles we sponsored an award which the US Toller Club accepted named after Eddy called the Eddy Advanced Versatility Award (a bronzed head study imedallion of Eddy). To earn the award a Toller must have their club CH and any 2 of the following Titles (OTCH, MACH, MH, CT)

Congratulations :) I'd love to hear some of the specific triumphs and tribulations you guys had a long the way. I have a feeling there are some wonderful stories in there :)

Very nice essay, Adele! Thanks for pointing us to it, Jeanne

Adele@NorthfieldDogTraining
Ann Arbor, MI, United States
I've been training my own dogs since 1985, and teaching obedience since 1988. I started Northfield Dog Training in 1990. I've been married to Fritz since 1984. We have two sons, Chris ('89), who recently graduated from The Natural Gourmet Institute in NYC, and Ryan ('92), who runs his own recording studio.
I strive to continue my own education in what works most effectively to train dogs and how best to communicate that to the people training those dogs. I work with many owners of diverse breeds of dogs.
I have written and self-published two books on competition obedience, and recently finished an extensive update to a video on retrieving. My goals for my business are to continue my own education and to help people enjoy their dogs through training.
I'm excellent at breaking dog training tasks into the smallest task needed by a given dog/owner team. I have helped people with diverse learning styles train their dogs. I'm flexible about what training techniques to use, striving to find the best and most efficient solution for a given team.